Break out your jerseys, stock your fridges and place your bets – it’s that time of year again. Let’s meet the teams;

Yes, that’s right; for the fifth consecutive year the splash bro’s led by Steve Kerr, are marching into the NBA finals virtually unchallenged. After seeing off Damian Lillard and the Portland Trail Blazers in the Western Conference Finals, Steve Kerr’s warriors have secured their place on the grandest stage in world basketball yet again. In a short 4 game series; GSW managed to sweep the would-be usurpers aside as Damian Lillard’s back finally gave out from carrying his team, having finished that series after playing more post-season minutes than anybody this season with 650.

Golden State’s journey to the Finals was the same story any NBA fan is used to hearing by now, Curry and Klay sank shot after shot from beyond the arc that ran the score up and out of their opponents reach. Whilst their game has evolved in recent years to include more drives toward the rim and floated 2 pointers, Steph Curry and Klay Thompson still lead the post season in 3 pointers made with 69 and 46 a piece. It’s important to note that they achieved all this without their marquee trade acquisition, Kevin Durant, who missed the Western Conference finals against Portland with a calf muscle strain. Whilst it may sound like the injured KD could pose as a chink in the armour, that would be a hasty assumption to say the least.

GSW still boast the deepest roster in world basketball today with 3x champions Andre Igoudala and Draymond Green in a more layered role-playing capacity than their gun slinging counterparts. Even in this role GSW can boast that they hold the most qualified and accomplished players as by the end of the Western Conference Finals series, Green led the post season in both total assists and blocks.

With the absence of Lebron James it seems like the Eastern Conference as a whole has a nearly impossible mountain to climb in the form of Golden State, one that even the self-proclaimed ‘King’ has had notable difficulty overcoming in the past. But that doesn’t mean we should write the finals off as a done deal just yet, not by a long shot…

Kawhi Leonard has strolled into the Eastern Conference and snatched the crown King James’ vacated in style. Having gone 0-2 to start the series against Milwuakee, the Klaw inspired his team to complete a reverse sweep on the back of a slew of monstrous performances across the 6 game series.

Going into this post season there had been some murmured doubts about whether No. 2 was the same player who had once won the finals MVP during his tenure in San Antonio but Leonard silenced those doubters with an outstanding display of 2-way basketball that saw him average over 29 points and 9 rebounds in the Eastern Conference finals.

Many analysts and experts had picked Giannis’ Milwuakee Bucks over Toronto heading into the series but the more experienced Raptors were able to disrupt his offense by shutting off his access to the driving lanes and forcing Giannis into one of the weaker aspects of his game, mid-range jump-shots. It wasn’t only Kawhi doing work on both ends of the court however as Serge Ibaka and Danny Green both took short stints locking up with the Bucks’ big man.

That was the prevailing theme of the series, Kawhi doing the dirty work and a supporting cast of league veterans filling in the gaps. Whether or not these wily vets will be able to overcome the hot-shot favourites; à la the Dallas Mavericks over the Miami Heat in 2014, remains to be seen. With the likelihood that Kevin Durant will be missing an extended period of the finals and Leonard’s run of great form, this year’s clash is set to be a tight one.

Can Kerr’s bay-area ballers complete the historic 3-peat and solidify their dynasty? Or can Kawhi lead Toronto to the franchises first ever NBA championship? All these questions and more will be answered starting this Friday when the Golden State Warriors face-off against the Raptors in Toronto’s Scotiabank Arena. 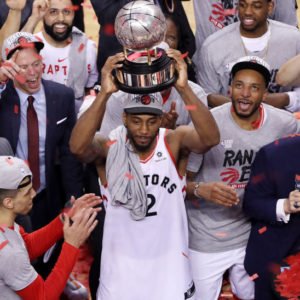 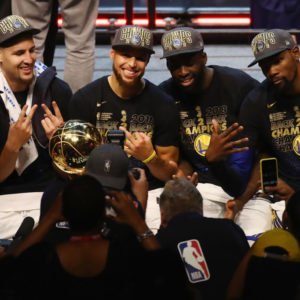